Denver Dog Trainers Thomas and Linda Aaron are the owners of FetchMasters. Tom is a certified dog trainer through both Animal Behavior College  and the Certification Council of Professional Dog Trainer (CCPDT).

Linda instructed canine and equine massage therapy for the Rocky Mountain School of Animal Acupressure and Massage before leaving that job to continue supporting the growth and success of FetchMasters Dog Training. She also is a certified dog trainer through CCPDT.

Both Tom and Linda specialize in high-performance obedience and off-leash reliability in high distraction environments, as well as behavior modification for a number of dog behavior problems. 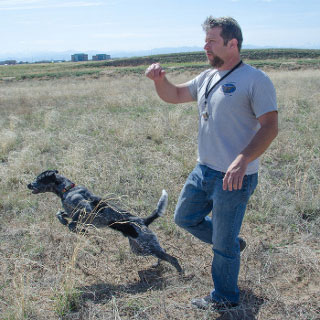 Tom grew up in West Virginia and was introduced to the dog world by his father who raised and trained hunting hounds. He spent his early years hunting for small game in the mountains of West Virginia with a dog known as a “bench-legged feist.”

Linda grew up in New Mexico, competing in junior rodeos and spending countless hours in the barn and pasture with her horse and faithful cattle dog who watched over their family’s livestock.

Tom spent several years in the military and tech industry and badly needed a change of pace. When they found a Labrador Retriever puppy in the high desert near Alamosa, Colorado, Linda suggested that Tom train the pup for bird hunting as a way to get outdoors more. 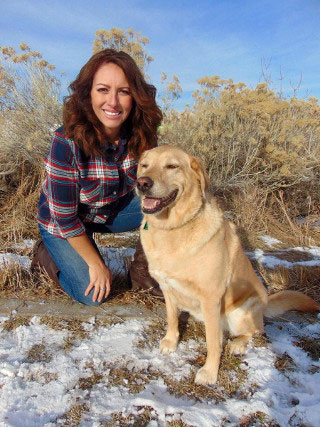 However, the puppy was fearful and could not withstand the harsher methods used by traditional gun dog trainers. So, Tom began researhing ways to train the dog using positive reinforcement methods. This decision led to their researching the capabilities of positive training methods in high distraction environments on thousands of pet dogs and hunting dogs in Colorado, which quickly built their reputations as the go-to trainers for off-leash reliability in and around Denver.

Their knowledge has culminated in the formation of the region’s only Positive Gun Dog Training Program, the nationally known Positive Gun Dog Association, and being featured on the blog of Victoria Stillwell (host of Animal Planets “It’s Me or the Dog”).

When not training dogs, Tom and Linda travel nationwide giving workshops designed to teach hunting dog owners and other dog industry professionals how to train high-drive dogs without the use of shock collars, choke chains or other aversive techniques or devices.

Recipients of the 2016 Denver A-List first-place award for having the best dog training in Denver, Tom and Linda feel that providing world-class dog training and customer service is their calling. 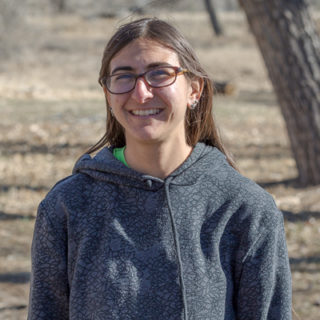 Once a Fetchmasters client, Jessie has a love for the crazier dogs out there. In fact, she prefers the dogs that tend to stump many seasoned trainers — like her German Shorthaired Pointer, Cadence.

She started with FetchMasters as an intern. Having applied herself astutely to the job, she earned an early promotion to our Junior Dog Trainer and later to our Senior Dog Trainer position, in which she ensures that all dogs are meeting their training goals.

While a large part of Jessie’s current focus is on training our board-and-train dogs, she also assists with our highly successful leash aggression class, teaches private coaching sessions, and helps train and oversee interns.

In her spare time, Jessie loves to run. Far. She is a three-time Boston Marathon qualifier, loves taking nature photography and attended Metro State as a student athlete. 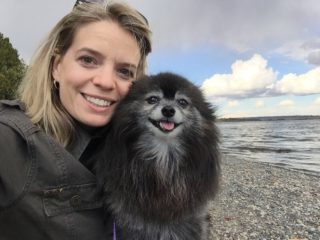 Dana has always loved animals, but since she and her husband first rescued Tobi (Pomeranian), dogs will always be part of their life.

Dana and her husband currently have two other rescues, Fozzie (Pomeranian) and Kona (Chow/German Shepard Mix), both of which have very different personalities.

These challenging personalities quickly prompted Dana to learn more about dog training, and she soon realized a new passion.

I addition to helping push our dogs-in-training to their potential, Dana also helps FetchMasters with the development of training-centric media. She is very excited to bring her strong work ethic and outgoing personality to the FetchMasters team.

While the folks listed above represent the heart and soul of our training team, we always have a group of interns moving through our system. This is because we prefer to train and promote from within in order to maintain the nuances and integrity of our training methodology.

Our interns typically train dogs multiple times each day under the supervision of the above trainers. So, the interns learn right along with the dogs in our care.

Ready To Get Started?