Dog Obedience Training Is Not “Tricks”

Posted on May 24th, 2017 by FetchMasters in Behavior Modification 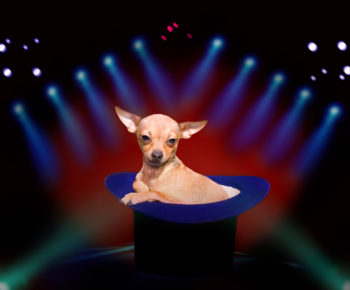 I recently had a phone conversation with a potential client, who said her dog already knew “all those tricks like sit and down.” She went on to explain she just wanted her dog not to jump on guests when they entered the house or beg for food while the family was eating at the dining room table. Her statement led me into my oft-given explanation of why dog obedience training (which consists of skills like sit and down) is not about “tricks.”

Let me clarify that this article is by no means about the niche dog trainers refer to as trick training. Trick training for dogs is a fascinating pursuit, and it can be very complex and require a high degree of skill on the part of the trainer. Instead, I am challenging the incorrect notion that skills like sit and down are nothing more than “tricks” (enunciated with a little condescension) that have no relevance for dealing with canine behavior problems.

So, continuing on with the caller, I wanted to get a better feel for how well her dog could actually perform the obedience commands it already knew. So, I asked her a few clarification questions:

The caller answered yes to all these questions, indicating that her dog does not really understand the meaning of sit. To her dog, sit includes a sense that the behavior is optional, or a sense that the dog is free to terminate the behavior on a whim. Her dog may find sitting on cue a fun thing to do, but sit has not been developed to a level that lends itself to utility; it is not a usable obedience command. I explained this concept to the caller.

“Yeah,” she said, “but how do I get him to stop jumping on visitors?”

“Well, if you do not want him to jump on people,” I asked, “then what would you like him to do instead?”

“It would be nice if he would just sit … still …” The client was silent for a moment. I could sense the lightbulb flickering in her mind.

“So, you would like him to be able to really sit?” I asked.  “We can help you with that. Obedience training is one of our specialties.

Dog obedience training is not about cool tricks your dog can do – parlor tricks to show your friends. It consists of behaviors developed to a level suitable for solving real-world problems. For example:

However, for any of these obedience commands to be useful in real-world situations, they must be fully developed and proofed against a variety of distractions. This is the goal of obedience training – solving or preventing problematic behaviors by giving the dog an alternative behavior to execute. It goes beyond “tricks” – at least as the word is used in the misinformed sense.

While it is beyond the scope of this article to explain how to fully develop obedience commands, suffice it to say that the best way to get a dog to do just about anything is to teach him to want to do what you ask. However, it is equally important to communicate to the dog the parameters of what you are asking him to do.

So, the dog should not understand sit to mean: Put your butt on the ground.

Instead, he should understand it to mean:

By applying the same principles to all obedience commands, you can elevate them to a level of usefulness.

While all this is easy in theory, there are several things that can complicate the process of obedience training a dog. For example:

Sorting through such obstacles is where a good dog trainer is invaluable.

Ready To Get Started?